Louise decides it will be safer to send Erica to live with her father. When Simon arrives to pick her up, she gives him the £15,000 that Phillip gave her as a trust fund for Erica. Arriving at ZBG Bank Crawford calls her to let her know that Hugh Borne has been found dead. He tells her that she needs to be careful because the criminals may have people watching her in the bank – she can’t trust anyone. Crawford phones Harry Wallingford to let him know that Louise is working for them now, and he needs to keep an eye on her for her own safety. Mart sends Louise to Canary Wharf to check out the transaction team for the Lewis Stone deal. On the transaction floor, Louise sees Ben and thinks she recognises him but can’t place him. As she leaves, Ben nearly bumps into her and suddenly remembers that he has seen her at the Curry House. In the Canary Wharf canteen, Louise deliberately bumps into Ben and puts a note on his tray: ‘I know about Starwatch. We need to talk.’ She shows Ben the scars behind her ears and they agree that they have to help each other. 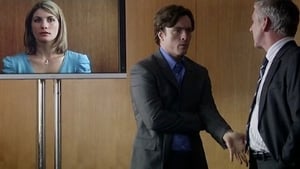